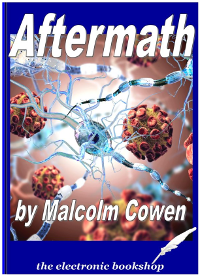 Malcolm Cowen’s new novel, has now been published and is for sale on the Amazon/Kindle website.

We invite you to read it and to submit stories of your own, written on the same theme, which will be published as the sequel to ‘Aftermath’.

Cover Illustration Copyright and Supplied by

We invite you to join the world of ‘Aftermath’ and submit your stories We plan to follow Aftermath with a second anthology of stories from other authors set in the Aftermath universe. If you wish to submit, remember that:

1, The emphasis of the stories is not the plague; it is people’s reaction to the plague.  Their response may be good or bad, noble or foolish but it must be a credible human story, maybe a love story or a murder story. It can just be how  someone comes to terms with the events they have lived through. The more my story is about people, the less boring it will be. Nigel Kneale author of Quatermass.

2, Violence, hatred and sexual content is acceptable, if required by the plot, but should be handled with discretion. Your characters deserve respect and dignity.  Bad behaviour should never be glorified or shown as acceptable.  Sex and Gore to spice a story up is not acceptable. If you feel you must include sex and gore, may we refer you to the top shelves in any disreputable newsagents, where a wide selection is usually available?

3, Your story may be set in any part of the world. Your own area would make sense, as you are best placed to understand how people from your own culture would respond to the plague.

4, Your story may include established characters from Aftermath; however they must act within character and no changes to their storyline should be made.

6, This is not a story about vampires, werewolves, zombies, alien invasion, demonic attack or mad scientists.  There is nothing wrong with any of those genres; they are just not relevant here.

7, Submission should be emailed to Isobel Pritchatt editor@e-bshop.co.uk   as Word documents, to arrive by Monday 9th January 2017.

8, Royalties will be shared equally by other authors of the short stories.